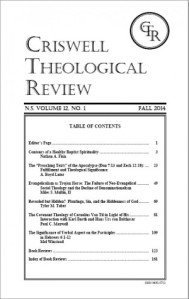 Occasionally CTR provides academic forums that are not devoted to a specific theme so contributors can provide specialized essays on a broad spectrum of topics. And this Fall 2014 edition serves as such a volume. Herein, readers can engage two articles pertaining to New Testament studies as well as individual essays devoted to Christian spirituality, the history of evangelicalism, philosophical theology, and systematic/historical theology.

Our lead article is by Nathan A. Finn who serves as Associate Professor of Historical Theology and Baptist Studies and is the director of the Center for Spiritual Formation and Evangelical Spirituality at Southeastern Baptist Theological Seminary in Wake Forest, NC. Finn engages the various factors and complexities that are intrinsic to any attempt at constructing a robust taxonomy of spiritual disciplines within the context of the Baptist tradition.

Our second article is by A. Boyd Luter who currently is Adjunct Professor of New Testament at Liberty Baptist Theological Seminary in Lynchburg, VA. Luter argues in his article that the prophetic texts of Daniel 7:13 and Zechariah 12:10, as they are initially found in Revelation 1:7, are pivotal to understanding the general thrust of the Apocalypse. To support this claim, Luter examines possible chiastic structures embedded in these Old Testament passages, assorted intertextual links in Matthew’s version of the Olivet Discourse, and certain portions of Revelation where the eschatological prophecies of Daniel 7 and Zechariah 12 are described as being fulfilled.

The third article is written by Miles Mullin, II who serves as Associate Professor of Church History at the J. Dalton Havard School for Theological Studies at Southwestern Baptist Theological Seminary’s campus in Houston, TX. Mullin contends that while twentieth century postwar evangelicalism was successful in rallying conservative Christians together to protest certain social ills, this surge of unity ultimately served to weaken the movement in the long run because it forced its participants to downplay their own denominational loyalties thereby fostering a theological minimalism.

The fourth article is provided by Tyler M. Taber who is currently a doctoral student in Philosophical Theology at the Free University of Amsterdam. Taber engages the issue of God’s hiddenness, which in contemporary analytic philosophy, refers to the concept of whether God’s existence is questionable because of an apparent lack of empirical evidence to display his presence and activity in the world. Taber addresses this issue by interacting with the work of Alvin Plantinga and contends that part of the way in which Christian thinkers can respond to this dilemma is by highlighting the noetic effects that sin has upon humanity’s capacity to discern God’s interaction with the world.

The fifth entry is offered by Paul C. Maxwell who is a doctoral student studying Systematic Theology and is the Waybright Leadership Scholar at Trinity Evangelical Divinity School in Deerfield, IL. He also serves as a research analyst at the Center for Bioethics and Human Dignity. Maxwell examines the covenant theology of Reformed theologian Cornelius Van Til to show how it contrasts with the theological projects of Karl Barth and Hans Urs von Balthasar; particularly as it pertains to their views of the relationship between the ontological and economic Trinity and God’s relationship to history.

Finally, our sixth article is provided by Mel Winstead who serves as Assistant Professor of Biblical Studies at Southern Evangelical Seminary in Charlotte, NC. In his essay, Winstead endeavors to show how the grammatical factor of verbal aspect can enhance our understanding of New Testament texts. To do so, Winstead examines the role of verbal aspect in Greek grammar and then surveys its role in the use of various participles in the famous warning passage of Hebrews 6:1-12.

Subsequent to these articles, this volume concludes with sixteen book reviews in the hopes that they can inform readers about works which can improve their theological libraries. And also remember that past issues of CTR can be accessed online at atla.com. Your local university or seminary can provide you with a password.