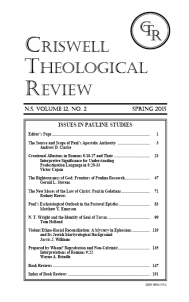 There continues to be no shortage of discussion among biblical scholars about the theology of Paul. Monographs, articles, and substantial volumes continue to be published as thinkers engage such important topics as Paul’s view of justification, the law, Israel, Christ, and eschatology. This is why the Spring 2015 edition of CTR is solely devoted to topics in Pauline Studies.

Our lead article is by Andrew D. Clarke who serves as Senior Lecturer in New Testament in the School of Divinity, History, and Philosophy at the University of Aberdeen in Scotland. Clarke examines the nature of Paul’s apostolic authority as it initially functioned in his own ministry and how it is still expressed through his writings within the Christian canon.

Our second article is by Victor Copan who currently is Associate Professor of Ministry Leadership and Biblical Studies at Palm Beach Atlantic University. Copan analyzes how the theme of creation permeates Paul’s discussion in Romans 8:18-27 and carries over to 8:28-39, thereby giving insight into the meaning of his predestination language in vv. 28-33.

The third article is written by Gerald L. Stevens who serves as Professor of New Testament and Greek at New Orleans Baptist Theological Seminary in New Orleans, Louisiana. Stevens examines how the doctrine of justification continues to be debated within current New Testament scholarship by surveying the publications of three specific scholars; those being Francis Watson, Douglas Campbell, and N. T. Wright.

The fourth article is provided by Rodney Reeves who is presently Professor of Biblical Studies and Dean of the Courts Redford College of Theology and Ministry at Southwest Baptist University in Bolivar, Missouri. Reeves discusses how part of Paul’s argument in his letter to the Galatians is based on his conviction that he served as a kind of apostolic “new Moses” who helped mediate the message of the New Covenant to his converts.

The fifth entry is offered by Matthew Emerson who is Assistant Professor of Christian Ministries at California Baptist University in Riverside, California. Emerson contends that eschatology is a major theme that has been neglected in much of New Testament research on the Pastoral Epistles. This leads Emerson to argue that in these letters, Paul consistently alludes to the eschatological already/not yet tension which permeates the rest of the New Testament.

Our sixth article is written by Tom Holland who is Senior Research Fellow at the Wales Evangelical School of Theology in Bridgend, South Wales. Holland critiques N. T. Wright’s view that Paul was a former Zealot and political radical. Instead, Holland argues that previous generations of New Testament scholars have been correct in their thesis that Paul was a devout but misguided rabbinic student who was making strides among the ranks of Jewish leadership.

Next, our seventh entry is by Jarvis J. Williams who is Associate Professor of New Testament Interpretation at the Southern Baptist Theological Seminary in Louisville, Kentucky. Williams argues that the background undergirding the violent language used in Ephesians 2:16 to describe how Christ reconciles Jews and Gentiles actually derives from Jewish martyrological narratives in 2 Maccabees.

And finally, our eighth article is offered by Wayne A. Brindle who is Professor of Biblical Studies at Liberty Univeristy in Lynchburg, Virginia. Brindle contends that there is an exegetically viable way to read Romans 9 which does not see Paul as advocating the Reformed idea of predestination unto reprobation.

Subsequent to these articles, this volume concludes with nineteen book reviews in the hopes that they can inform readers about works which can improve their theological libraries.

This entry was posted in Journal. Bookmark the permalink.
Loading Comments...