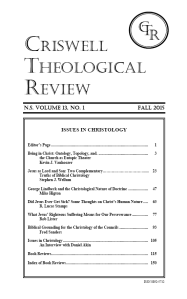 The person of Christ is a mainstay doctrine at the very heart of the Christian faith. That is why there is never any shortage of research, debate, and dialogue about what Scripture says concerning Jesus of Nazareth. In fact, today there are lively and sometimes complex discussions about how Jesus understood his messianic role and identity; how the early church’s understanding of his divine status coincided with the undergirding foundation of Jewish monotheism; or how the teachings of Christ should be fleshed out in the life of the church in every generation. These are just a few of the subjects that scholars are engaging today. Consequently, we have decided to devote the Fall 2015 edition of CTR to issues in Christology. Each article is written by a theologian who engages various facets of this important doctrine and we pray that this volume will advance Christian scholarship as well as edify God’s people, the church.

Our lead article is by Kevin Vanhoozer who serves as Research Professor of Systematic Theology at Trinity Evangelical Divinity School in Deerfield, Illinois. Vanhoozer explores the New Testament concept of being “in Christ.” He begins by surveying the Pauline emphasis on the idea and then delves into recent philosophical treatments of the concept of “space” or more specifically, contextual location. From here, Vanhoozer applies his discoveries to Ecclesiology by showing how the salvific benefits of being “in Christ” converge in the participatory experience of being “in” the church.

Our second article is by Stephen Wellum who is Professor of Christian Theology at the Southern Baptist Theological Seminary in Louisville, Kentucky. Many in New Testament scholarship are convinced that the biblical writers primarily focus upon what Christ did as opposed to who or what he was as a divine person. Wellum contends that this is a short-sighted view of the storyline of Scripture. And to support his critique, Wellum builds a cumulative case to show how the Bible upholds both Christ’s identity as well as his mission in a complementary fashion.

The third article is written by Mike Higton who serves as Professor of Theology and Ministry in the Department of Theology and Religion at Durham University in Durham, North East England. Higton expresses a transition in his own thinking about the theological method of Lutheran theologian, George Lindbeck. As opposed to previous charges that Lindbeck utilized Christology in his work at a minimal level, Higton now believes he heavily integrated Christology into his understanding of doctrinal discourse in sophisticated ways to help solidify his strategy for ecumenical dialogue.

The fourth article is provided by R. Lucas Stamps who is presently Assistant Professor of Christian Studies at California Baptist University in Riverside, California. Stamps addresses the question of whether Christ could have incurred any illnesses during his earthly incarnate state. To tackle such a knotty concern, Stamps recruits Athanasius and Thomas Aquinas to be his dialogue partners as he probes the subject. Ultimately though, Stamps contends that the safest deduction to make is that while Christ was clearly sinless, it is inconclusive as to whether he could have become sick.

The fifth entry is offered by Rob Lister who is Associate Professor of Biblical and Theological Studies in the Talbot School of Theology at Biola University in La Mirada, California. Lister, in both scholarly and pastoral fashion, surveys the theme of Christ’s suffering to show how it unfolds in the biblical narrative and not only provides the means of salvation. It also establishes a paradigm that his people are to follow; namely that as he suffered as an obedient servant, so likewise should his servants do the same.

Our sixth article is written by Fred Sanders who is Professor of Systematic Theology at the Torrey Honors Institute, which is part of Biola University in La Mirada, CA. Sanders contends that the doctrinal constructs of Christology that were synthesized at the first four ecumenical councils are now theological preconditions that we must maintain as we read and interpret what Scripture says about the person of Christ.

And finally, our last article pertains to an interview with the President of Southeastern Baptist Theological Seminary, Daniel Akin. The questions for the interview pertain to an assortment of biblical, theological, and ethical issues related to the doctrine of Christology. Akin is gracious and perceptive in providing scholarly as well as pastoral insights on these matters. In turn, his interchange can be helpful to pastors and new evangelical scholars alike.

This entry was posted in Journal. Bookmark the permalink.